On 8-15-21 Krys Grzyb and Greg Dinauer set an 83km triangle task from Twin Oaks airport in Whitewater, WI east to East Troy, northwest to McDermott airport and then southwest back to Twin Oaks. Greg aborted the task early and flew back to the airport. Krys was doing well getting over 5200’agl on nine climbs. He tagged the first two turn-points and was headed back to the airport.

To this point he had been in the air for 2hr 15min of which over 1½ hours was above 4200’. The winds were 5-9mph from the southeast. Sustained climbs over 1000’ were averaging about 350fpm with one climb averaging 770fpm. He found a thermal just past the last turnpoint 18km out and climbed 300 feet to ~4400’. He needed about a 12:1 glide to get back with a crossing tail wind. He confidently left the last climb knowing he could make it and even if he hit increased sink, he would hit a thermal soon enough.

He went on a long glide sinking over 300fpm and was soon down below 1000’. He selected a narrow field of grass along a farm for his LZ. Approaching from the southeast at 500’ he unzipped the drogue pouch and began extracting it from the pocket. His intent was to deploy it near the ground but the drogue slipped away and accidentally deployed.

Immediately the glider turned right and his sink rate increased to 600+fpm. He pulled in on the control bar, the glider began to pitch down and the sink rate increased to over 900fpm (peak). Thinking the drogue malfunctioned, he reached back to grab the bridle but couldn’t find it. He instantly began to correct for the turning dive. With extreme effort the glider rounded out pointing downwind and just above the corn. The glider, slowed somewhat by the corn, whacked in hard but the glider and Kris were miraculously unharmed. Pretty shaken, he called to the airport to get a retrieve; Greg and Chico showed up quickly to help get the equipment out of the corn.

Krys has used a drogue chute for many years. This particular drogue was developed to train runners to improve their speed. It has one long bridle that runs back to the chute shroud lines. These lines are short relative to the length of the bridle. He used this type of chute for several years with the drogue deploying aft of the keel. This spring he purchased a new drogue from a different manufacturer and replaced his old worn one. He did not compare bridle lengths before installation. Up to this flight the new drogue had not been tested/deployed. After landing, Kris discovered that the keel had penetrated between the shroud lines and the drogue was affixed/centered around the keel.

The bridle length was a couple inches shorter than his previous drogue. When the drogue accidentally deployed, the position of the drogue effectively provided a lifting surface on the end of the keel. When the control bar was pulled in to increase sink rate, the forces on the aft end of the keel decreased the nose angle further thus progressively increasing the sink rate (to the point the nose was pointed at the ground). It took close to all of Krys’ strength to push the bar out far enough to overcome the resistance to level out the glider before entering the tall corn.

In the moment, he focused entirely on recovering the glider turn and descent and felt there wasn’t enough time or altitude to throw his main parachute. His Moyes RX 3.5 sprogs were at the factory settings. Corrective actions that Krys has taken or intends to take include: shorten bridle to prevent keel interaction, add an extra line to one of the shrouds and the harness loop to give access to the pilot to deflate the drogue, and adding a drogue release so the drogue can be cut loose from the pilot.

Purchase a few pieces of useful gear from the Oz Report

I've decided to keep a small inventory of a few useful, but lightweight, items that can be easily and quickly shipped to pilots who need a slick aerotow bridle/release or a simple to install and powerful antenna. The items can be purchased on-line and I'll get them right in the mail to you. 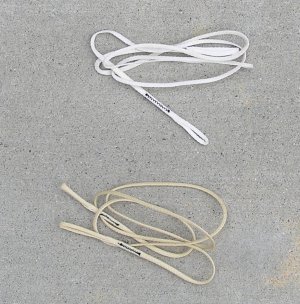 Click on above to view a higher resolution image. The top one is the Spectra, the bottom, the Vectran.

First, the HS release (see above) which is very common in Holland. When I dug out this picture, I noticed that the "saddle" where the pin rests is actually much deeper then on my own release, which is not even a recent one. I never noticed it before, but it seems there are different versions of this release, probably because the current manufacturer had it DHV tested for the German market. In this old version, one can imagine release problems if the towline is angled downward. On the newer one, that would not be a problem. The HS release is double to enable winch towing.

Of this type of release Rohan Holtkamp writes:

Mike Nooy's release was triggered but at the angle of the rope that was greater than 90 degrees to the 'finger' at its max open point, so the rope did not come off the end. The release 'finger' was mounted firmly to the front of the harness, as with all the H.S systems. We call them Euro tow systems.

The release 'finger' pivoted only horizontally and less than 180 degrees. The finger should be able to pivot vertically as well as horizontally and in excess of 180 degrees to release in any direction. It needs a UNI joint, like found on a car tail shaft but smaller and covered so it will not snag.

What we call a HS release here has pins that rotate in two planes; the pin can open away from its saddle (vertically), and can also pivot horizontally (horizontally, if you lay the release flat on the table that is). It has been proven to open with the line pulling every direction imaginable.

This works. I think it is made by Koch. Bought in France, more expensive than the loop but worth every euro. Mechanical, no slack, Just bang on it and it goes. 2 releases . I use one for aerotowing. The metal ring is a must, as it was said.

This release I made myself a year ago, based on what is known in the USA as a barrel type release, but this way it works straight as a chest release. I had some troubles with it when I started using it; I wore through several weaklinks until I attached the weaklink to a ring and hooked the ring into the release. Apparently the parachute type pin had too sharp edges or maybe a little burr.

That's why I am currently making a new one following the same principle, this time with a pin I made from a nail that I bent myself; I soldered the eye closed because this is where the weaklink is pulling and it should be absolutely smooth:

Not been tried yet, but as you see it is simple enough.

Some folks have mentioned a string to a finger as an extra quick release option. With this release, a string could be attached to the barrel if wanted. Personally, I think that the time spent until you decide to take action, is more decisive then the time needed to open most any release.

There are several different types of bridles described, diagrammed, or pictured here: http://hpac.ca/tow/HPAC_Tow_Manual.asp#3.3.  We would like to have more pictures too, and would also appreciate any comments or advice you might have. How is it done where you are?

Robin Strid died because the weaklink wrapped around one leg of his spinnaker shackle. The weaklink was too strong to break. The weaklink was made of multiple loops. At least, that's the story that I heard Rohan Holtkamp, who investigated the accident, present to the team leaders at the Worlds.

One of the legs rotates when the release is opened and the weaklink has to slide over the thicker leg. I'm communicating with Rohan to get better answers to what happened to Robin and how to avoid this in the future.

I'll have much more on releases soon. Send me your thoughts on bridles and releases and any pictures of bridles.

Send in your pictures of your bridle types.

Lots of talk about different types of tow release, which are good etc., but no pictures. I don't know what a "Pro-tow" release looks like. More to the point, many readers won't have a clue what type of release Robin was using and may still be using one themselves. A 'rogues gallery' would help.

So please send Davis digital photos of various bridle types to help me and other's out.

I hope Bo pulls through this okay. This is a shot of the bridle attachment and as you will note the rectangular carabineer is deformed with the nut backed off. This is how it was found by others.

Seeing him spiral in, will stay with those who saw it for some time to come. He is a very lucky man indeed.

There doesn't seem to be a need for the second carabineer and that leads Bob Lane here at Quest to speculate that Bo neglected to hook up the main carabineer to the loop at the bottom of the hang strap. This loop is located between the back plate and the outer shell of the harness. It would seem that Bo might have pushed his bridle up between the back plate and the shell and then not got around to finishing the installation. The carabineer would have been slightly bent as it was pulled out of the harness.

As many of you know by now, our friend, little buddy and pal Bo Hagewood has had a serious hang gliding mishap. As I write this, his life is not in danger, but he is in ICU in Norfolk Virginia. Current reports to me say that he has multiple punctures in a lung, a lacerated liver and kidney as well as as some damaged vertebrae.

It seems that the worse (most concerning) injury however is his wrist/forearm. I am currently traveling on business, but my wife Jan is working the phone back home to keep me updated. According to her latest update, Bo's wrist is broken in ten places and there is concern about his future use of the arm or even his keeping the arm.

Again, keep in mind that this is early info and may change (this situation has changed in reports to me three times in the last twelve hours - never getting better).

There is rumor that he has insurance. If this rumor turns out to be false, then I'm sure that the hang gliding community will continue to do for Bo what it always has.

Regarding his accident, my partner and Aeros Test Pilot - Sunny Venesky is now arriving to the area and will do a full analysis of the wreckage. If any part of the glider failed (which it appears it did) we will determine whether that part was damaged previously and then proceed from there. No stone will go unturned on this investigation. The smart thing at this point would be for all persons flying Combat L's to not perform aerobatics until more is known. Please understand that I'm not saying there's a problem - don't misread this - but there seems to be no doubt that the glider failed for some reason. This is the glider that Oleg flew in both Florida meets.

We will update via Oz Report and our website - www.justfly.com - as soon as we know anything.